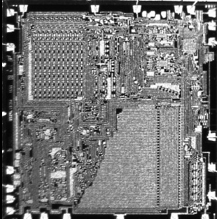 I have just received from a friend a link to a piece of the history of the first “singe chip calculator”:  http://www.spingal.plus.com/micro/

The web  page is titled “Microprocessor History” and tells the story of what was research and development work done by a little know company, called  PICOElectronics Ltd, in Scotland in the late 1960’s.

Now, while I am not particularly interested in the debate wether they managed to beat INTEL to the punch, I found some of the details extremely curious for how this work seems to be eventually traveling across the world to NY first where General Instruments had its headquarters (PICO Electronics used GI to manufacture their chips) and later to a new (in those days) factory in Arizona! Among the many products developed in those years were the very first video games (Pong) components.

What a coincidence, that factory eventually was sold by GI to a group of private investors funded by venture capital  (Sequoia)  who created: Microchip Technology Inc.

Their first microcontroller product was then called the PIC!

This entry was posted in PIC24, PIC32. Bookmark the permalink.