First Look at the PIC16F188xx family 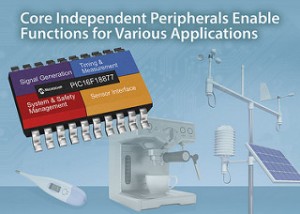 Back in August a press release announced the imminent launch of the new PIC16F188xx family [link]. This was bundled with another similar launch for the PIC16F157x family that I have reviewed with a tiny bit more detail in this previous post [link].

Today, I  received the first copy of the full (while still preliminary) data sheet of the first two members of the family: the PIC16F18855 – 28 pin model, and PIC16F18875 – 40 pin model, both with 8k words, 16k bytes of Flash memory. (The family will eventually include models up to 32k words or 64k bytes Flash memory size!)

As was the case for the previous family launch, I feel the press release has not been doing justice to these parts, too little detail, too generic a message, invariably designed to impress investors rather than designers…

Here some more juicy details distilled from a first pass through the data (sheet):

So B) and C) are not really new-new, it is more a matter of showing how the PIC16 and PIC18 families are converging and  borrowing from each other the best features introduced in the last few years (CIPs, XLP).

The ADC2 deserves some more careful analysis as it promises to be another breakthrough advancement of the Core Independent Philosophy.

The intuition that all peripherals should be connectable directly and capable of performing their functions as independently from the core as possible.

Core Independent Peripheral can be configured and assembled to form complete functions  that reduce the core workload, reduce the required clock speed, and eventually reduce code complexity and/or power consumption.

To this end the Computation part (the second C) in the new module, is where things get really interesting.

The idea behind the ADC2 peripheral seems to come from the observation that most applications require some kind of post processing for the data coming from the A/D converter, where some common trends can be identified:

All of the above cases would require the core to respond to an interrupt (or worse to sit on a blocking loop waiting for the conversion result) only to cycle through a step of  a state machine of sorts that processes the data received, buffers it and compares it to thresholds. This could be repeated for tens of thousands of times per second, with a work load that can amount to a large percentage of the entire application.

The ADC2, steps in exactly to cover these needs. It adds two post-processing stages to a very traditional 10-bit (and in future versions 12-bit) ADC module that will be otherwise very familiar to all PIC16 and PIC18 users. The first stage is capable of performing a simple  accumulation (16-bit signed), optionally followed by a division (shift) to obtain an averaged value. The second stage can continuously or periodically perform a (pair of ) threshold  comparisons.

Note that the sequence used to obtain each sample includes automatically: a periodic (re)trigger, a timed sampling period but can also include the setting of guard pins and a differential measurement as required for advanced (capacitive) touch sensing operations (HCVD).

The core is interrupted, awakened or simply an event is generated internally only when both stages have completed (on the assigned number of samples/period) and only if/when a particular condition (logic expression combining the two thresholds)  is verified.

The result of so much automation can significantly change the performance and power profile of an application.  I will need to put my hands on samples of these devices to test it out, but I have a feeling that these features can simplify considerably any touch sensing application,  and more in general eliminate so much of the workload from many other sensor applications (wearable/battery powered sensors) where the power consumption was a severe limiting factor before and tending to the ADC was the main/sole occupation of the CPU…

This entry was posted in PIC16 and tagged CIPs, MCC, PIC16. Bookmark the permalink.